In 1880 Carl Rehfeldt established a sugar mill near the junction of the two rivers.

Alberton is a farming and residential area located on the southern bank of the Logan River in the northern Gold Coast. A town reserve was surveyed at the junction of the Albert and Logan Rivers in 1865 and The Brisbane Courier described the area as a fine open piece of land sheltered on the south by Mt Stapylton. Both the river and town reserve were named by European settlers in honour of Prince Albert, husband of Queen Victoria.

The first German settlers arrived at Alberton from Bethania in 1868 and erected a church in 1869  which was later replaced by St Peter’s Church in 1886.  In 1876, the Alberton School opened to meet the needs of the local children who had previously been taught privately. The school operated for ninety years before being closed in 1966.

Along the river flats downstream from the reserve and on the lower slopes of the mountain, farm land was selected or purchased at country auctions. Sugar and maize were the main crops of the region and in 1880 Carl Rehfeldt established a sugar mill near the junction of the two rivers. The mill continued in operation until the 1940s.

In 1887 devastating floods hit the district. St Peter’s Church became a refuge for the locals who were stranded and were subsequently rescued by the steamer Kate. In the same year the Gem Hotel was established. It was destroyed by fire in June 1933 and rebuilt.

The Alberton Ferry commenced operation in 1870 and transported people and goods across the Logan River between Alberton and Carbrook until 1948 when it was closed due to poor condition and declining use following the opening of the Logan Bridge in 1931. In December 1938, a Royal Australian Air Force Seagull amphibian flew through the high tension electric cables spanning the river at the Alberton Ferry with the tragic loss of all four men on board the plane. A number of locals witnessed the event.

Over time, the town reserve was consolidated by farmers into larger farming blocks and, by the late 1970s, these acreage blocks were sold to a new population of settlers. By 2015, the residential acreages on the former town reserve were surrounded by sugar cane and prawn farms. Workers at the Alberton Sugar Mill, circa 1910. Photographer unknown 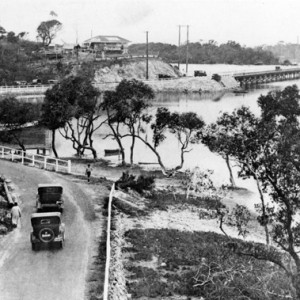