The whale on Burleigh Beach at the height of the 1926 Christmas season was, initially, an irresistible attraction for residents and visitors alike.

You are here: Home > Seaside Stories > The Burleigh Whale Visiting whales regularly pass the Gold Coast providing spectacular displays for onlookers. Humpbacks are the most common whales travelling along the Gold Coast coastline, however, the arrival of a dead sperm whale (Physeter Macrocephalus) on Burleigh Beach at the height of the 1926 Christmas season was, initially, an irresistible attraction for residents and visitors alike.

The carcass was already bleached white and had extensive damage from predatory feeding when it washed ashore next to the bustling campsite. At the time, it was thought that the whale may have been dead for up to two years before eventually washing up on the beach.

When the whale first washed ashore and the story reached the local newspapers, thousands of visitors descended from neighbouring towns on trains, special buses and motor cars to see the spectacle. There was also an interest in taking souvenirs from the carcass, particularly from the jaw.

However, in the summer heat, the smell from the decomposing whale was overpowering, encouraging many campers and holidaymakers to pack up and return home early. The odour was so strong that, with the Nerang Shire Council alerted, a variety of methods were tried to dispose of the carcass as quickly as possible. Boats tried to tow the whale back out to sea but the lines split and broke when trying to shift the huge weight. Attempts to destroy the carcase using dynamite were also unsuccessful and only resulted in Mrs M. Smith requesting payment for damage to her house which had lost one sheet of roof iron and one piece of timber.

The Nerang Shire Council then paid a number of residents £50 to remove the whale. The residents were able to take apart some of the carcass using axes and knives but the task was overwhelming.

During all attempts to remove the remains of the whale, many sharks were drawn to the scene and arrived off Burleigh Beach. Shooters armed with .303 rifles tried to deter the sharks by shooting at them. It’s not difficult to imagine the frustration for holiday makers who were unable to remain onshore due to the smell or to enter the water for fear of sharks. 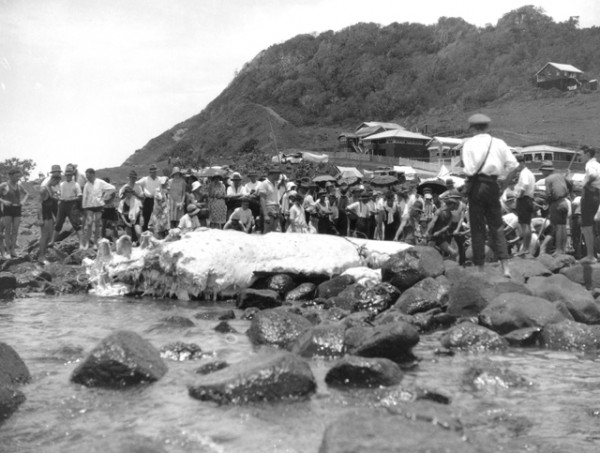 Finally a massive 327 cubic yard (250 cubic metre) pit was dug by the Nerang Shire Council on the beach to accommodate the remaining parts of the carcass. Given the huge size of even the remaining portions of the whale, a bullock team was used to drag the remains to the pit on the beach in early January 1927.

The 4.5m jawbone of the whale was retained and deposited with the Queensland Museum. Upon arrival at the Museum, staff needed to create a number of false teeth to replace those taken by souvenir hunters. The jawbone remains a feature in the Museum’s display.