The H2 Hinde Tree (Macadamia integrifolia) was one of 30 trees believed to be planted in the 1920s at ‘Colliston’ by Michael James Hinde on his Gilston farm which he had established in 1879.

You are here: Home > Hinterland Stories > The H2 Hinde tree The H2 Hinde Tree (Macadamia integrifolia) was one of 30 trees believed to be planted in the 1920s at Colliston by Michael James Hinde on his Gilston farm which he had established in 1879.

Stories from the Hinde family tell that Michael found the saplings in scrub while travelling to Pimpama to court his wife Alice in the 1880s. He collected the young trees and transplanted them at Colliston.

In later years, using the original trees as source material, he planted macadamia trees between the already established orange trees on his farm. At the time it’s believed that his citrus trees were no longer thriving and the bush tucker macadamia nuts were a small cottage industry. Following Michael’s death in 1937 the trees were cared for by his family.

The macadamia trees came to the attention of the Department of Agriculture and Stock, which trialed three samples known as H1, H2 and H3. The H2 was the most successful and an orange metal tag, attached in 1948 by the Department of Agriculture and Stock, identifies the tree as the parent of one of two Australian-grown macadamia cultivars. These cultivars contributed to the establishment of the commercial Australian macadamia nut industry between the 1960s and 1980s.

The tree at Colliston played a key role in the success of the industry initially as scion wood, and later as the parent of most root stock used to propagate the majority of macadamia trees grown in orchards in Australia.

The H2 tree’s viable nut bearing days are over, but in 2008 it was entered into the Queensland State Heritage Register. 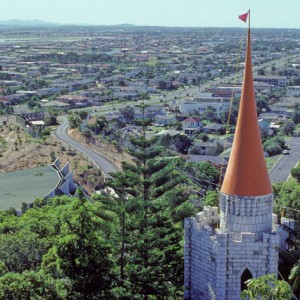