The Andrews family were instrumental in founding the first Presbyterian Church on the Gold Coast.

In 1981, the easterly portions of the old Merrimac Estate which had been owned by Thomas Blacket Stephens were divided and gazetted. Two new suburbs were created. One was named after Stephens and the other was named after a large family who had settled to the west and owned large parcels of land stretching between Tallebudgera and Mudgeeraba.

The suburb of Andrews between Reedy Creek, Burleigh Heads and Tallebudgera was named after the Andrews family who were originally from Londonderry, Ireland. In 1862, five members of the family, including four brothers, Samuel, William, Isaac and John, travelled to Australia with their uncle, before eventually settling in and around Tallebudgera in the 1870s.

Each brother built a home in the area. Maryville was the home of Samuel, Fairview was the property initially held in partnership by William and Isaac while John’s home was known as Honeysuckle. Somerset, which was built in 1899, became the property most closely associated with Isaac who was a member of the Nerang Shire Council for 26 years.

The Andrews family were involved in timber getting, shop keeping and a range of agricultural practices including mixed farming, managing dairies and raising cattle. The large extended family were actively involved in the local community and were members of numerous local societies and clubs. In particular, they were instrumental in founding the first Presbyterian Church on the Gold Coast. They were also closely involved in the establishment of Tallebudgera’s first post office and telegraph service which was run by one of the Miss Andrews at Fairview.

In 1995, following public pressure for re-defining suburb boundaries and with the amalgamation of the Albert Shire and Gold Coast Councils, new suburb changes began to take place.

Andrews was amalgamated with Stephens and a section of Robina to form the new suburb of Varsity Lakes in 2002. Isaac Rankin and Grace Andrews with their family at ‘Somerset’ in Mudgeeraba, 1896. Photographer unknown 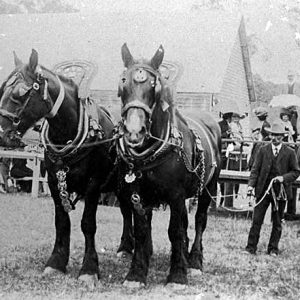