Kinkabool was constructed next door to Margot Kelly’s Hibiscus Restaurant on a small block in Hanlan Street that had previously been the location of the Flamingo Nightclub.

Kinkabool is one of the earliest high-rise developments in Queensland and the very first one on the Gold Coast. The small modernist multi-storey building signals the beginning of high rise accommodation on the Gold Coast. It was designed by John M. Morton and Lund Hutton Newell Black & Paulsen.

Kinkabool was the idea of Stanley Korman who was also responsible for a number of other developments including the Chevron Hotel, Chevron Island, Paradise Island and Lennon’s Hotel at Broadbeach. Kinkabool was constructed next door to Margot Kelly’s Hibiscus Restaurant on a small block in Hanlan Street that had previously been the location of the Flamingo Nightclub.

Built by J. D. Brooker Constructions during 1959 – 1960, the ten storey Kinkabool towered over Surfers Paradise and was promoted as an “…imposing structure…destined to become the prestige address of the Gold Coast [with] the latest in modern luxury elevators, gay but dignified lobbies…and generally an atmosphere of quality…”

It has been dwarfed by its much larger neighbours over time, but can still be glimpsed between other skyscraper apartment buildings and hotels. On 5 February 2009 Kinkabool, located at 32 – 34 Hanlan Street, was added to the Queensland State Heritage Register. Kinkabool and the Tahitian Sun, Surfers Paradise, circa 1965. Photographer unknown 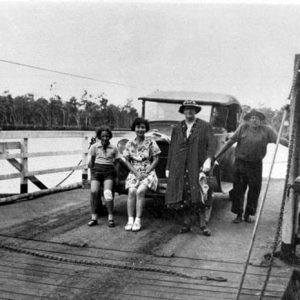