In 1886 a meeting was held to discuss the establishment of a School of Arts and Mechanics' Institute.

You are here: Home > Hinterland Stories > Nerang School of Arts

Prior to the 1880s, Thomasine Browne and her husband Captain Walter Browne had offered their home for social events and small concerts in Nerang but there was a desire for a venue that could accommodate the larger number of people settling in the surrounding area.

To provide the community with a public venue, B. Cockerill of the Royal Mail Hotel built a hall on land that would later be known as Bischoff Park. Called Tobin’s Music Hall, after Cockerill’s licensee, it was constructed prior to February 1880 and offered a place for public meetings, magic lantern shows and general entertainment.

In 1884 the residents of the Nerang district, including Thomasine Browne, Mr and Mrs Cooper and William Philpott, organised a fund raising concert in aid of the Cricket Club. The public concert, with performers from the surrounding area, was held on 10 May 1884 in Tobin’s Music Hall and was a success. The concerts continued to held every few months for the benefit of community organisations that required funds. The small music hall, which was destroyed in a cyclone, was the foundation of the School of Arts and Mechanics Institute in Nerang.

In 1886 a meeting was held to discuss the establishment of a School of Arts and Mechanics’ Institute and money was collected to build a hall further west of the flood area in Ferry Street. The building was opened in 1888 with a bazaar, maypole dancing and a concert. The library had over 400 books, with residents giving many valuable volumes, and the reading room had daily and weekly newspapers and periodicals. Thomasine Browne was elected a life member of the Nerang School of Arts to honour her involvement in establishing the hall.

On 16 September 1929 a public meeting was held in the Nerang School of Arts and Mechanics’ Institute to decide whether the building should move from its position on Allotment 1 of Section 18, at the corner of Ferry and Cotton Streets to land gifted by Mr W. H. Spencer, long-time president of the School of the Arts, on Allotment 9 of Section 7 situated in Price Street, Nerang.

The hall was moved by truck to the new site by the MacKenzie brothers and the extended and renovated building was officially opened by Mr T F Plunkett, MLA, on Friday 25 September 1931.

Renamed the Nerang Community Hall, the building remains an important part of the Nerang streetscape. It continues to have strong social significance for the Nerang community and those organisations and clubs that use the building more than 100 years after it was first considered. 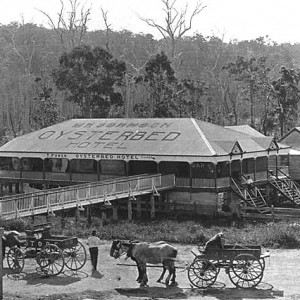