Richard was a pilot for boats using the channels leading into the South Boat Passage.

In 1868 Richard Gardiner selected 176 acres of land at Nerang Creek Heads. A few years after his purchase the area was renamed Southport. His property was located to the south of Queen Street, on a small creek, which emptied near the mouth of the larger Nerang River. While Richard also selected 160 acres of land in Nerang, he chose to establish his home and business at Southport with his wife Mary Jane.

Gardiner’s vessel brought regular supplies from Brisbane to his wharf at Southport where he also established a small slab store to serve the needs of the growing community, local timber getters and travellers. Until 1874 this was the only permanent store south of Pimpama.

With ships at constant risk of wrecking on the Southport Bar, Stephen Tobin of Tallebudgera Town petitioned to have a pilot stationed nearby to guide ships through the treacherous crossing. Richard Gardiner was thought to be the perfect person to do this as he had already established himself through previous efforts in assisting vessels in distress and helping to retrieve cargo.

Richard and his wife earned a modest income from takings in their store which was supplemented by Richard acting as pilot and light keeper for trading boats using the channels leading into the South Boat Passage.

By 1876 Gardiner built a larger home near his store which also catered for guests. In the same year he applied for a license to sell liquor in his new accommodation house, but it was not granted until approximately 1877.

Gardiner’s accommodation house was considered well-appointed and had three sitting rooms and four bedrooms. The area around the house, located near present day Brighton Parade and lower Queen Street, was very swampy. Despite this, many travellers negotiated the road which was lined with saplings planted by the Gardiners, in order to reach the house and store.

In February 1878 Richard petitioned to transfer this licence to William Charles Maund to run the hotel. By 1882 the accommodation house was demolished and a larger hotel, surrounded with verandahs in keeping with the Queenslander style of architecture popular at the time, was built in its place.

In 1897 Gardiner had a steam launch, which he name Southport, fitted out in Brisbane. She could carry 25 passengers and was used for pleasure trips in the surrounding waterways.

Richard Gardiner was tragically killed in a dynamite explosion in his shed on the morning of 5 May 1898. He was 59 years old. The force of the explosion was so great the shed was totally destroyed. It was believed that he used dynamite for removing sand bars that occasionally formed in the channel. His burial took place at Southport General Cemetery on the same day as his death.

The site of Gardiner’s small accommodation house eventually became the location of the Southport Hotel and, many years later, the Sundale Shopping Centre. The creek where he made his home is known as Gardiner’s Creek. 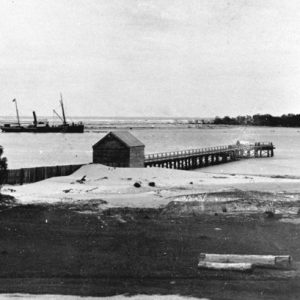 The Steamship SS Tweed anchored off Southport, circa 1891. Photographer unknown Brighton Parade along side Gardiner’s Creek, Southport, circa 1925. Photographer unknown


Sources of information and further reading