Accommodation houses, with their own private changing facilities for the convenience of guests, proudly advertised the proximity of their bathing boxes to the water’s edge.

Bathing machines and bathing boxes were popular at English seaside resorts from the mid-1800s. Bathing machines were equipped with wheels that allowed them to be drawn by horses into the water where bathers could spend time without being seen by bystanders on the beach. Bathing boxes were small timber sheds permanently located on the beach where people could change in privacy or rest comfortably in the shade.

On the Gold Coast, then known as the South Coast, bathing boxes were at a number of beaches but the highest concentration was at Southport, Burleigh Heads, Kirra and Greenmount beaches. Of varied design and construction, the brightly coloured bathing boxes were privately owned and used by families while other, sometimes larger, bathing boxes were associated with specific guesthouses, hotels or schools. 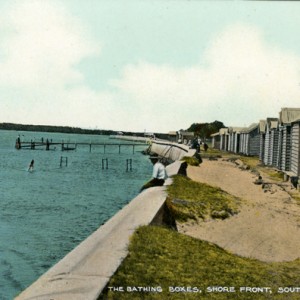 Bathing boxes on the beach at Burleigh Heads, circa 1910. Photographer unknown The seawall and bathing boxes, Southport, circa 1910s. Photographer unknown Accommodation houses with their own private changing facilities for the convenience of both male and female guests, proudly advertised the proximity of their bathing boxes to the water’s edge. In some cases, bathing boxes were also used as temporary storage for surf lifesaving equipment at a time when club houses were being established.

In Queensland in the early 1900s, the State government allowed local councils the ability to regulate swimwear. This led to an increase in the number of bathing boxes along the foreshore as an increasing number of visitors required a place to change into the modest beach wear fashions of the time.

At the same time, complaints were being received from residents and ratepayers concerned about the growing number of bathing boxes scattered along the best areas of the beaches. In the mid-1930s, the Southport Town Council built two bathing pavilions at Southport and Main Beach to provide beach goers with a place to change into their swimwear.

Considered a convenience by some and an eyesore by others, from the 1930s the bathing boxes began to be removed from Gold Coast beaches after decades of use. None remain.