You are here: Home > Seaside Stories > Oysters and Oystering

The Yugambeh people harvested oysters from the waterways of the Gold Coast for countless years and created large oyster middens throughout the region.

Following the arrival of European settlers, the harvesting of the oyster beds and removal of the oyster middens for the extraction of lime, resulted in the Queensland Government bringing in the Oyster Act of 1863 to license the cultivation of oysters.

Revisions of the legislation in 1874 created tighter controls and with a system of licenses offered at public auction, the industry became a lucrative source of revenue for the Queensland Government.

To encourage a sustainable oyster culture, the Oyster Act of 1886 offered transferable leases over identifiable oyster grounds in Morton Bay which was divided into thirty-nine sections containing 178 oyster banks. The largest leaseholder was the Morton Bay Oyster Company which, in addition to their northern holdings, established a camp at Coombabah, north of Southport and in 1881, took over the lease at Currigee on South Stradbroke Island.

Other leases applied to the Southport Broadwater, Nerang Creek, Tallebudgera Creek and Tippler’s Passage. The people who worked these other leases included the Levinge, Tippler, Lucas, Griffin, Hage, Perry, Dux, Proud and Clark families. During the early years of the industry the cosmopolitan mix of people who lived and laboured in oyster beds numbered more than the population of Southport at the time.

The breakthrough at Jumpinpin in 1898 causing the separation of Stradbroke island into two islands had a disastrous effect on the oyster banks. The previously sheltered waterways were severely impacted by the tides. Between 1904 and 1936 local oystermen, backed by the Southport Chamber of Commerce, petitioned the Queensland government to close the newly created entrance by dumping derelict boats. This suggestion was rejected and the Jumpinpin Bar remained open. The Morton Bay Oyster Company’s last year of trading was 1955. 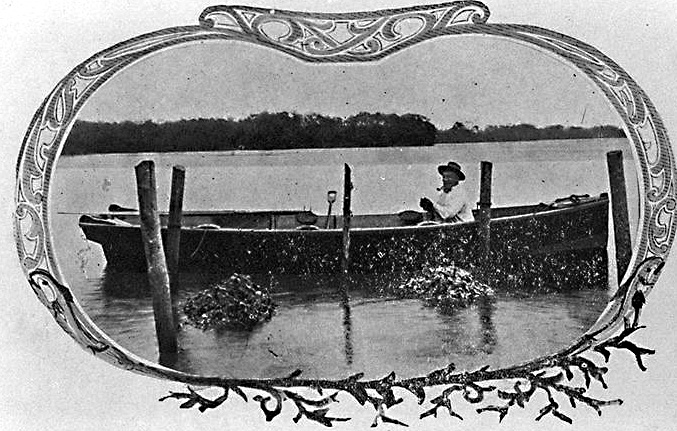 Oyster farmer culling oysters on a lease in the Broadwater, Southport, circa 1919. Photographer unknown