The beach front circular tower was the first building to exceed thirty storeys on the Gold Coast.

Built across a site that held eight earlier properties, the over thirty storey beach front circular tower called The Focus, with two basement levels, was built in 1973 – 1976. At the time of its construction, the almost 100 metre tall Focus apartment building was twice the height of the existing high-rise buildings in Surfers Paradise and was the first building to exceed thirty storeys on the Gold Coast. It was built using a combination of precast concrete, block wall infill and concrete cast in place.

Located at 144 The Esplanade on the corner of Staghorn Avenue, Focus was designed by Don Gazzard, of Clarke Gazzard Architects, and developed by Luigi Ferro. The consulting engineers were W.D. Moir & Partners while the surveyors were J. V. Lawson & Associates. The building was influenced by Australia Square in Sydney which was designed by Harry Seidler in collaboration with Pier Luigi Nervi in the late 1960s.

The circular form of Focus resulted in the lifts being centrally located and the fire stars being built in an unusual ‘scissor’ style. Each one of the 123 units offered a 270 degree view of the surrounding coastline and hinterland, while a helipad designed rooftop provided the highest vantage point in Surfers Paradise at the time. A split level master penthouse was located on the top level with two penthouses on the floor beneath. 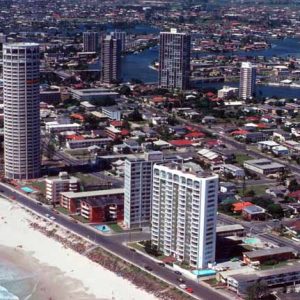 Each of the units beneath the penthouse levels had floor to ceiling glass doors opening onto the balcony from all living areas. The tiled balconies located within the circular form of the tower, rather than protruding from the structure, were a feature of the building and provided stunning views, shelter from the elements and privacy from the neighbouring units.

Designed with luxury in mind, the units of Focus were fully carpeted and tiled with two bathrooms and double bedrooms with built in wardrobes and dressing table; a kitchen, complete with dishwasher and garbage disposal, storage cupboards and a separate laundry.

On the ground floor, Focus offered a fully licensed restaurant, cocktail bar and reception area. A concession area and the unit for the onsite manager were also located on the ground floor. Outside in the 1 ½ acres of landscaped garden were a heated swimming pool, barbeque, tennis court and a children’s wading pool and play area. Each floor was serviced by three elevators and resident’s cars were parked in three acres of locked garages over two basement floors. The basement and roof held water storage which was delivered to units via booster pumps.

The units of the Focus apartment building were sold as Strata Title with finance available to approved purchases of up to 85% of the purchase price payable over 10 to 15 years. In 1978, the cost to rent a three bedroom penthouse in the beach front circular tower, with ‘his and hers’ bathrooms and seven balconies, was $600 per week for a minimum of a two week stay.